Where the rivers meet 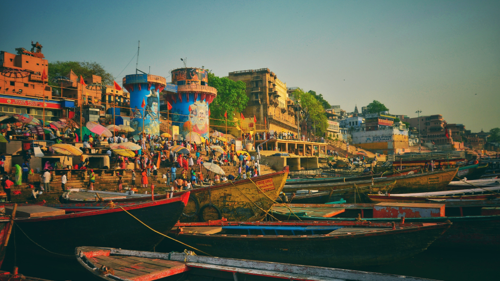 But can enlightenment still be found on the banks of the Ganges? For Westerners who settle down in Varanasi, the city appears to be the antithesis and antidote to the modern West. But many find themselves stuck in spiritual limbo, never belonging to the world they are in and the one they escaped. Scholar Manini Sheker argues that though pilgrims have long sought in India’s holiest city an antidote to the modern West, Varanasi is more dream than reality.   ‘In Varanasi, the pace of life was also slower, and recalibrated around ultimate questions: Hindus believe that to die here is to find release from action and suffering, and pilgrims have for millennia travelled here in search of moksha. Banarasis (the people of ‘Banaras’ as Varanasi is also known) very consciously exist within the ambit of a cosmic framework that has the power to explain suffering and injustice, and soften borders between people: every morning, the rich and poor, low and higher castes, men and women, the healthy and the infirm, toddlers and those crooked with age, descend to bathe in Ma Ganga, mother Ganges; in death, their ashes mingle in her waters.’