Pillow King Mike Lindell is never going to rest, or shut up 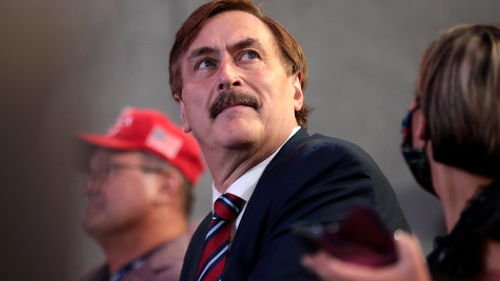 Unpacking the media craze that has followed since he was seen outside of the Oval Office. Laugh at him, shun his business and even sue him: the MyPillow CEO won’t stop trying to prove Trump got cheated. Josh Dean profiles Mike Lindell, an avid Trump supporter who came into the spotlight after being seen in the White House in the last days of Trump's presidency. Weeks after Joe Biden's inauguration, he's still convinced the election was rigged — here, he told Bloomberg Businessweek why. "That 'truth' being Lindell’s opinion — evidence-defying conviction is more like it — that the Nov. 3 election of President Joe Biden wasn’t a true and fair result. Biden, Lindell asserts, 'is not our real president' and is in the Oval today only because of many injustices including, but not limited to, voting by dead people, voting by illegal immigrants, voting by minors, late-night dumps of ballots printed in China and smuggled into Georgia, and — the one he really can’t abide — the hacking of machines from Dominion Voting Systems. China did this, along with four other countries, he said. 'You had China, a little bit of Russia. You had Iran. I can’t remember the other two. It might’ve been Iraq.' To state the obvious, none of this has been proved anywhere."